This technique can be a useful tool in improving many conditions. The signals can be used for body movement, communication, seeing, hearing, and many other things. This can help improve many diseases and conditions, including spinal cord injuries, strokes, MS and cerebral pareses. First, I will discuss how this could help in movement, then I will describe some other functions of brain machine interfaces.

* In most cases, these brain signals are actually electroencephalography (EEG) or electrocorticography (ECoG) signals. To avoid abbreviations that make you wonder what you’re doing here, I will just use the words brain signals.

The brain and the BMI exchange information. The brain generates signals when you want to perform a certain action, for example grabbing an apple. When your body is completely functioning, you won’t need a brain machine interface. Your brain and your arm will exchange information. First there is information from the brain towards the arm about the to-be-performed action. Then, there is ‘feedback’ information back from the arm towards the brain about the performed action. For example about if the apple really feels like an apple, how warm the apple is, and in what position the arm is. In addition to this, your eyes provide you with visual information about the apple and the position of your arm.

When the arm is not (completely) functioning, it may become hard or impossible to grab that apple. One way to facilitate this process, or to provide training opportunities to regain this function, is through a brain machine interface. A BMI, for example a robotic arm, prosthesis, or electrical stimulation connected to your brain, can take over the role of your arm. When your brain shows the signals of wanting to grab the apple, the robotic arm can respond to this. Consequently, information is sent back to the brain. This way, the loop between the BMI and the brain is complete.

Many diseases and disorders can be mitigated with this technology. It is mainly useful when body parts are (partly) paralysed or weakened. For example after/in a spinal cord injury, stroke, MS, ALS, locked-in syndrome and cerebral palsy.

Brain machine interfaces are also used for walking when paralysed. The brain signals are recorded. Usually, this takes a lot of ‘training’: connecting the brain signals to a certain action. This training is like learning the machine and the person to ‘understand’ each other. When this training is performed well, it is possible to use the Brain Machine Interface to perform actions that were not possible before. An example of this is to use the signals measured by the Brain Machine Interface as input for an electrical stimulator that is connected to electrodes on the legs. This way, the leg muscles can automatically be stimulated when the person thinks about walking, for example. You could look at this as if the connection between the BMI and the electrodes is a ‘wireless external nerve’ that allows movement when the inner nerves do not.

In contrast to this ‘wireless external nerve’ approach to help people move again after paralysis, a big part of research is aimed at fixing the inner path. Of course, this strongly differs per condition. However, to take spinal cord injuries as the example, several therapies in studies are aimed at allowing patients to eventually move again without being connected to any device. Epidural/spinal cord stimulation is one of these approaches. Several studies have shown promising results when this technique is combined with functional training, click the above link to read more about it.

Brain machine interface for other purposes

BMIs can be used for more than just motor/movement functions. Brain machine interfaces can also be aimed at providing assistance or improvement for cognitive or sensory functions. For example by measuring the mental state in order to offer relief in case of sleep problems or pain. Electrodes can also be put in the brain to see where a problem arises, for example in case of epilepsy.

The measured brain signals can be used for many other things as well. For example for moving a cursor on a screen or a helicopter or spaceship in a computer game. A BMI can also use the brain signals for motor imagery: imagination of moving various body parts, which can then be used to visualise in virtual reality for training. Furtherly, a brain machine interface can be used for controlling a device, for example a wheelchair. Last but not least, the possibility exists to use a BMI in order to communicate with others. Like telepathy. This may prove useful for, for example, comatious or vegetative patients who might be able to express their wishes then.

If you’re curious about some further examples of BMI/BCI inventions, you can check out the BCI (Brain computer interface) awards. 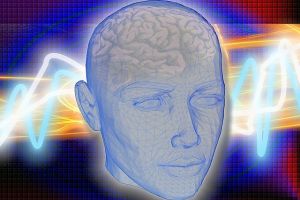 The brain machine interface is implanted in the grey matter of the brain. This provides the highest quality of measured brain signals. However, as the device is implanted in the brain, surgery is needed. This brings its risks and costs. The scar tissue that comes with the implantation could also diminish the signal conduction.

This BMI approach concerns electrodes on the surface of the skull. This approach is used most in studies. A brain signal helmet can easily be used and no surgery is needed for it. However, the measured signals are of low quality as the skull weakens the signals. Furtherly, this approach often asks for more time and effort prior to every use.

Brain signals, however, are not the only signals that can be measured. It is also possible to use muscle signals for generating movements with the same or other muscles. Check out my page about muscle (EMG) signals to find out more about this!

In this approach, the brain machine interface is implanted in the skull, but located outside of the brain. Not inside of the grey matter. This brings a lower risk of forming scar tissue compared to invasive BMIs. Also, the signal is better compared to non-invasive brain machine interfaces. This is because the signals do not have to go through bone tissue of the skull. Furtherly, less training is needed in this approach compared to the non-invasive approach.

The future of brain machine interfaces

Brain machine interfaces will definitely keep on improving. Research to this technology is being performed on a daily basis, promising continuously improving therapies. This website is aimed at sharing this scientific evidence with you. In this way, I try to use the gigantic mountain of scientific knowledge to facilitate the improvement in therapies. Feel free to check out more information on the website, for example about how to apply electrical stimulation and when not to use electrical stimulation. If you’re reading this, you may also be interested in reading about what a TENS (transcutaneous electrical nerve stimulation) unit is.

Choose the subject of your interest: